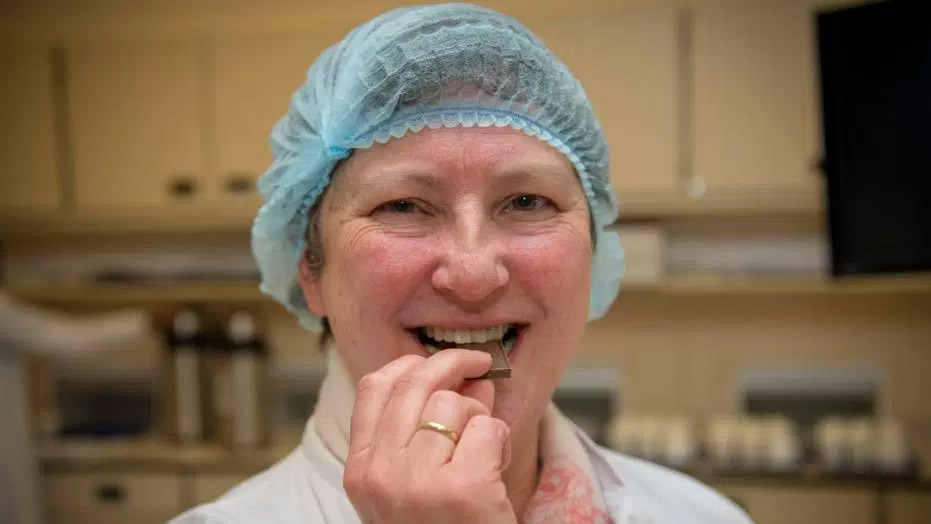 Angela Castleton, 54, from Middlesborough, gets paid £9 an hour to chomp on Cadbury's chocolate.

MOST of us would love to eat chocolate everyday but imagine getting PAID for it?

That's exactly what Angela Castleton, from Middlesborough, does in her job as a chocolate taster.

The 54-year-old, who used to work in IT, is now employed part-time by Mondelez ― the firm behind big name confectioners like Cadbury and Oreo.

She told the Sun Online: "Everyone gets a bit jealous when I mention my job. What's not to like about eating chocolate for a living?"

But those hoping for an easy opportunity to stuff their faces with chocolate all day should think again.

A chocolate taster like Angela can only work part-time for up to eight hours a week in order to avoid "palate fatigue".

Eager candidates would also have to relocate to the Mondelez’s science centre in Reading, where we spent a day with Angela.

In the building, tasters for Mondelez help the company perfect their recipes for chocolate lovers worldwide.

Before arriving we thought we might find a Willy Wonka-style workshop but there were no evidence of fairytales or Ompa-Loompas.

Instead, we are met with clinical white rooms and scientists wearing lab coats and disposable hairnets.

WHAT we learned at Cadbury's Reading Science Center